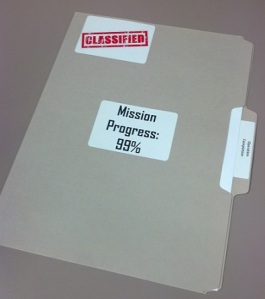 I have been a gamer since I was able to hold an Atari joystick as a young kid. Playing video games has always been something that relaxes and comforts me. However, “gamer” is a very broad term with a number of sub-categories that describe the type of gamer that someone may be. There are terms that describe the amount you play, like “hardcore” or “casual” gamers. There are also those who play computer games (PC gamers) as opposed to playing on an Xbox, Wii or PlayStation (console gamers). There are many other gamer sub-groups, but I identify with those known as the “completionists.”

A completionist is a gamer who is compelled to achieve all that a game has to offer. These people feel the need to finish every side quest, find every collectible, earn each alternate ending and even hunt for Easter eggs. A completionist will search every nook and cranny of every level in search of that hidden piece of loot or a clue to the game’s story. Extra time is spent reading arbitrary text or interacting with uninteresting objects for fear of missing some small detail. While “completionist” hasn’t made its way into Webster’s yet, it is a common and universally understood term in the gaming community.

Game companies are very good at knowing their customer and truly understanding how and why they play. It is one of the few industries where those who create the product, those who sell the product, those who review and rank the product and those who purchase the product are mostly the same types of people. Game developers have begun to appeal to gamers who strive to conquer games in their entirety. Some developers even encourage and reward the obsessive behavior of completionists. Many games have a scale to tell you how close to one hundred percent you have come. Some have an extra-challenging difficulty level that unlocks only after you have beaten the game once. Others have in-game rewards, like costumes or skins for characters that must be unlocked. Xbox and PlayStation have the “achievement” and “trophy” systems. Rewards are given to players for finishing a specific part of the game. Over time, some rewards have become more obscure and difficult to earn.

I recall the time a friend earned an Xbox360 achievement for the game Dead Rising. The challenge was called “7 Day Survivor” and it required him to keep his character alive for seven days of game time. This amounted to over twenty-two hours of real time. The character’s health depleted, so he had to continually search out food to keep himself alive while fighting off hordes of zombies. The first time he attempted it, he fell asleep at hour fifteen and his character perished. The second time, his console froze at hour ten and he was forced to reset. He finally finished the challenge after several failed attempts and never played the game again.

There are some great rewards available to those who are willing to put forth the extra effort and you can feel quite proud of certain achievements. However, being able to tell friends the story of how you earned a difficult trophy or discovered that secret path can be the best reward you earn. For all of the great things that can come from completely finishing a game, there are also some negatives that come with it.

Completionists can obsess over accomplishing something seemingly trivial in a game. Sometimes, the reward does not appear to equal the time and effort required to complete a task. Repeated efforts to get perfect scores can lead to several hours being spent on one small area of a game. This can make more difficult games or games with lots of tiny details very frustrating to a completionist. I have had a personal struggle with The Elder Scrolls V: Skyrim. One of my favorite games of all time also causes me a lot of stress. The sheer size of the game and amount of minute details that went into the creation of that masterpiece is seriously daunting. I have owned the game for over two years and have sunk hundreds of hours into playing it. Still, I have not even been to every major city, let alone completed the main storyline. I have had to stop playing for extended periods of time and revisit the game to keep from getting sidetracked by books in abandoned dungeons or long-winded conversations with NPCs.

Open-world games like The Elder Scrolls, Assassin’s Creed, and Borderlands are becoming increasingly massive. Game developers are advertising the enormous size of the playable world, but when is a game too big for a completionist? I shudder at the idea of playing Grand Theft Auto V. It may be one of the greatest games ever created, but there are so many things to do and see that I would easily become overwhelmed. I suffice to watch a few friends play and read reviews from trusted sources. Some of my favorite gaming experiences in recent memory are from playing games that are more linear than open-world. When there is a specific task to accomplish, you can focus on finding those hidden items or completing side quests without the stress of deviating far from the intended path. The Bioshock games, Bastion, the Lego games and Dishonored are a few that come to mind. You are playing one story line with only a few different options on how to play, but there are also hidden items and other rewards for sleuthing that fulfill my completionist tendencies.

Open-world games are definitely my favorite type. They appeal to the part of me that started playing in the first place. The creation of an exciting, interesting world that I can become completely engulfed in is (to me) the greatest accomplishment that a creator can achieve. It is hard to know I have to pass on some magnificent games because I simply don’t have the time or energy to invest in the completion. Video games are becoming more and more innovative as the industry matures and I am so very excited for what comes next. I only wish that I had been handed an Xbox One controller as a child instead of an Atari joystick. It would have been great to run home from school to explore Los Santos or slay dragons with miles of digital land to comb for treasure.